Eager to escape the city and hit the trail, my flight to El Calafate was greeted with much joy and anticipation when the day had finally arrived. We flew with Aerolíneas Argentina and had a very pleasant flight. The service was friendly and efficient, the flight came with some tasty snacks, and most importantly, we got there safely.

Below, I have quickly outlined my route throughout Patagonia and in the next several posts I will delve a little deeper into what worked, things I’d do differently, likes and dislikes…etc.

I was a bit underwhelmed when I arrived in El Calafate. The city itself is very unimpressive and has very little to offer aside from tourism [and an infinite amount of wandering dogs]. I found this to be very common for cities down south; their existence seems to be solely for tourism. With that being said, El Calafate is a great starting point for your Patagonian adventure because it is one of the cheapest cities to fly in to and has a ton of bus routes to other Patagonian cities. Depending what time of the year you are visiting, you might have to allow a few days to snag a bus ticket to popular destinations such as Puerto Natales, El Chaltén, and Ushuaia. We arrived in El Calafate in the middle of December and the city was much quieter than when we returned in January. I was able to book any tour I wanted in December, but now [in January] there is about a week wait for the more popular tours like kayaking in Upsala Glacier. I would suggest going in early December rather than waiting until January when the crowds really pick up.

There are a ton of companies on the main street that you can book tours through. Take a look around and see what interests you the most and can fit within your budget – there are loads of options to explore. 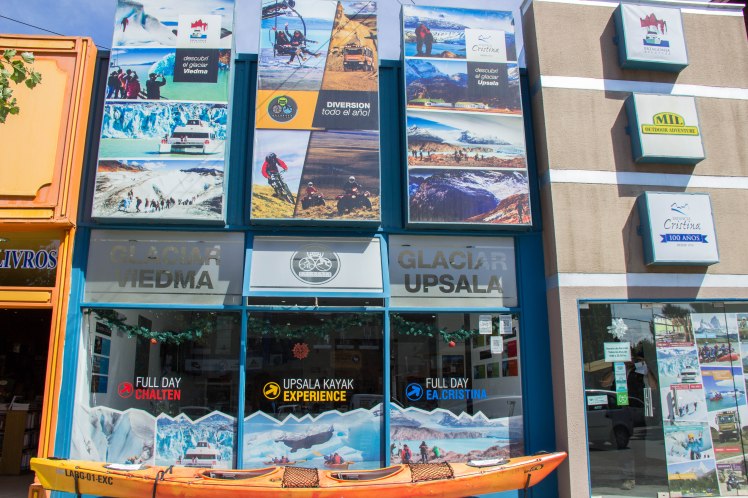 El Calafate was filled with beautiful hand-made goods. Paseo de Artesanos is an outlet from the main street and here you will find an array of colorful booths that offer all sorts of crafts – jewelry, pots, mate gourds, knitted clothes, leather work, and much more. Usually I’m skeptical about “artisanal goods” because they are generally just overpriced factory made items, but here you can watch the artists at work while they wait for customers to stop by.

So many shops! There is another shopping outlet along the main strip and it also has this cool pub called “Libro Bar” that we frequented almost every day for a cold craft beer or some empañadas. 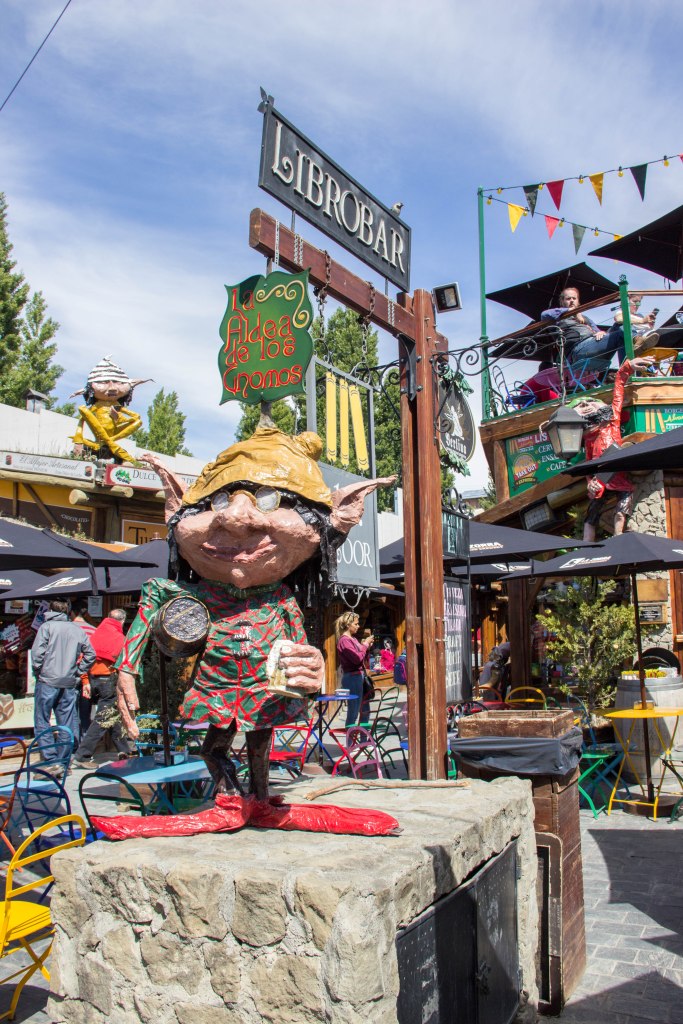 El Calafate also has a ton of chocolate/ice cream/jam shops. There must have been one every 4th shop we would pass by on the street. It became a little overwhelming with so many options to choose from. Luckily, I had some time [and a nagging sweet tooth] to kill and was able to try out several of the shops. Hands-down, Overjitas de la Patagonia was my favorite. The ice cream was incredible – smooth, rich, creamy, and full of flavor. If you haven’t yet, I highly recommend you try out Argentina’s speciality flavor, Dulce de Leche. I get it at every ice cream shop I go to and it never lets me down. For chocolate candy lovers, my favorite shop was Laguna Negra.

The hostel that I stayed at for my first stay in El Calafate was I Keu Ken. I really liked this hostel and it had a really good vibe. The only downside was that it was a bit of a hike from the city center and the walk back was uphill. The second hostel I stayed at was Hostel Buenos Aires and I really enjoyed my stay here. The owner, Facundo, just recently took over this hostel and he is very helpful and accommodating. Apparently the owners before him had received bad reviews on Hostel World and he is trying hard to improve its reputation – which has worked! The only downside to this place is the WiFi. It is not the greatest. Hopefully that will change overtime because I know he is still in the process of making many improvements to the place. It is also a block away from the bus station and a five minute walk from the main street – both huge perks to me.

Visiting anywhere in Patagonia requires a lot of travel time, a good bit of money, and some planning ahead.

William and I went on two tours and we enjoyed both of them! We booked through BAFT Tourism and I really liked this company. They were always on time and managed things well.

The tour cost $600 pesos versus just taking a shuttle bus there and back for $450 pesos. The reason I liked this tour is because the company offers a route slightly different from the other companies. All of the other companies take you just on the main highway up and back to the glacier but BAFT takes you on a back road through an estancia where you are likely to see some wildlife – hawks, eagles, guanacos, and this funny little bird that looks like an emu but I forget its name. Along the way, we took a quick stop at this quaint little ranch that had goats everywhere and a baby guanaco that was such a ham for attention! Afterwards, we entered the national park [paid $260 pesos per person for entrance fee] and had 3 hours to check out the glacier. You also have the option to take a “navigational tour” which is a boat ride up close to the glacier and back. It costs $250 pesos per person. We didn’t do it, but a lot of people did. 3 hours was plenty of time, if not a bit excessive, to check out the glacier. There is 4 km of walkway to view the glacier at several angles and many people packed a lunch and just sat watching it hoping to see some ice break off. Bring sunscreen and sunglasses!! There is little shade on the platform and on a sunny day the glacier can be blinding white. 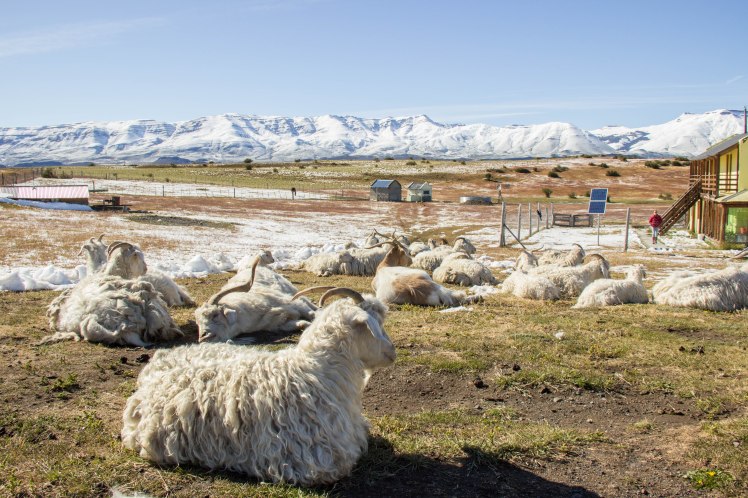 Perito Moreno Glacier – Check out the size of it in comparison to the boats! 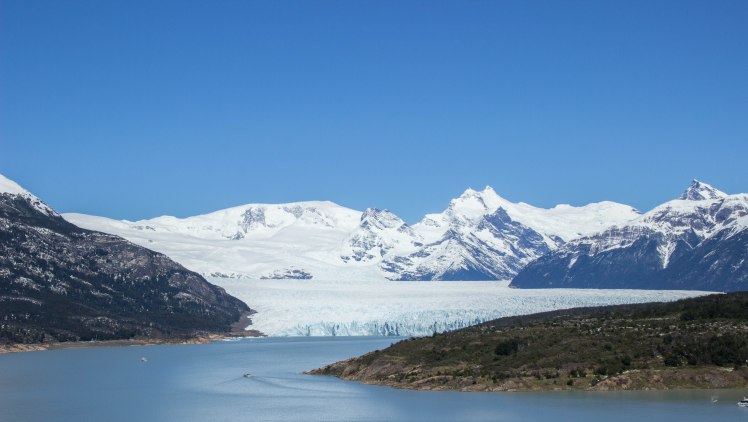 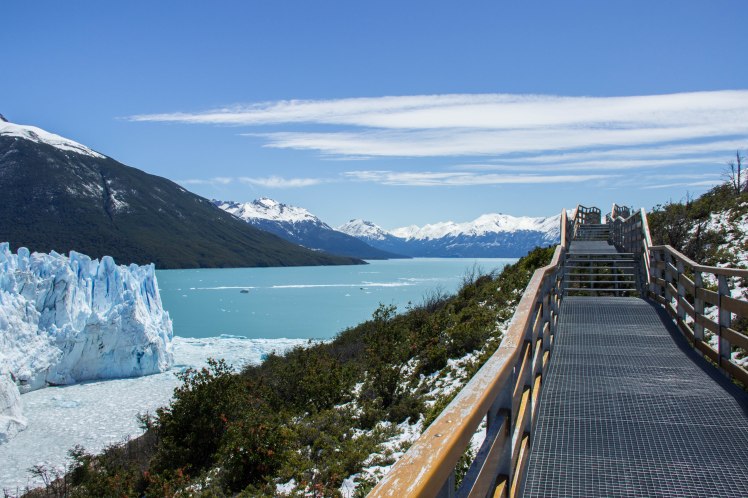 Cabalgata – Horseback Riding through an estancia

This tour price was a bit steeper at $2000 pesos per person, but it was a full 14 hour day tour. It included transportation to and from the estancia, coffee and pastries upon arrival to the estancia, a 5 hour trail ride to this beautiful lake, lunch [lamb, potatoes, and wine], and more coffee and pastries after riding. The riding was fun because it wasn’t your classic USA guided ride where the horses followed in a single filed line up each other’s butts. Instead, you had full control of your horse and had the freedom of riding as you please. The lake was breathtaking and we had lucked out with a beautiful sunny day! Again, bring sunscreen and wear a hat. The sun down here is brutal even on overcast days. The gauchos that led the tour were really nice and down to earth and the horses were all very well behaved. Aside from needing to get their feet trimmed, the horses seemed very well taken care of and were fat and happy! 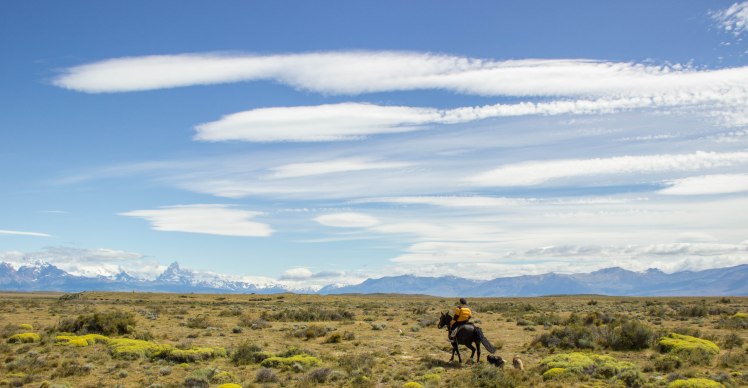 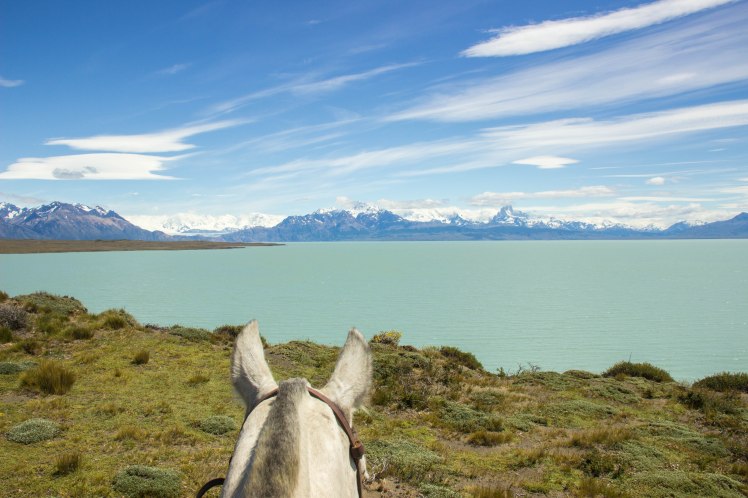